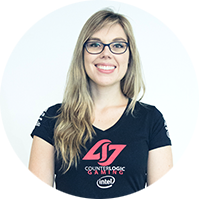 Stéphanie Harvey, five-time Counter-Strike world champion and female icon in pro-gaming, is now Director of Franchise Development for Counter Logic Gaming's Esports. Formerly a video game designer for Ubisoft Montreal, she is heavily involved in the Esports scene. Stéphanie is the official spokesperson for DreamHack Montreal, and for her own video game web series on RDS. Also known under the pseudonym missharvey, she works with the International Olympic Committee and devotes a lot of her time promoting healthy habits and gender equality in video games and combatting online toxicity. With 16 years in Esports as a player and 7 more in the industry as a developer, Stéphanie has earned nominations on the Forbes 30 under 30 & BBC 100 women lists and she was also awarded the title of Canada's Smartest Person in the CBC show's third season.