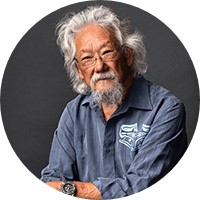 Dr. David Suzuki is a renowned Canadian scientist, broadcaster, author and co-founder of the David Suzuki Foundation. He is widely recognized as a world leader in sustainable ecology. He has received numerous awards and is Companion to the Order of Canada. Dr. Suzuki is Professor Emeritus at the University of British Columbia in Vancouver and holds 29 honorary degrees from universities around the world. He is well-known to international audiences as host of the CBC science and natural history series The Nature of Things, and to radio audiences as the original host of CBC Radio's Quirks and Quarks, as well as the acclaimed series It's a Matter of Survival and From Naked Ape to Superspecies. His written work includes more than 55 books, 19 of them for children. A longtime environmental activist, he co-founded The David Suzuki Foundation in 1990 to “to conserve our environment and find solutions that will create a sustainable Canada through science-based research, education and policy work.”